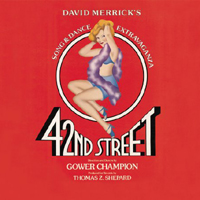 (1 / 5) This wasn’t the first Hollywood musical to be adapted to the stage, but its success established a trend that has reached well into the 21st century. Whether or not this trajectory is a good thing will always be a cause for argument. The Broadway incarnation of 42nd Street was the final work of Gower Champion, whose death was announced in a shocking and showman-like gesture by producer David Merrick immediately following the opening-night bows. Champion had transformed the movie into an enjoyable theatrical pageant with nonstop glitter, an occasional nod to Busby Berkeley, and very little of the film’s drive and desperation. Fueled by all that audience-grabbing spectacle and song, the production ran for years, but its manufactured nature is pretty obvious on the cast recording. The Harry Warren-AI Dubin score has been padded out with songs from other films, and the wonderful period sound of the original Warner Bros. orchestrations has been replaced with the expert playing of a punched-up pit band. Fortunately, there are some seasoned pros in the cast– Jerry Orbach, Tammy Grimes, Lee Roy Reams, and Carole Cook — to provide true musical theater resonance. In the role of Peggy Sawyer, the chorine-promoted-leading-lady who’s told “you’re going out there a youngster, but you’ve got to come back a star,” Wanda Richert is sweet and sings better than Ruby Keeler. (Of course, it can also be said that coyotes sing better than Ruby Keeler.) There are things to enjoy in this recording, even though we might wish that the gifted Champion had expended his final energies upon something more substantial. — Richard Barrios 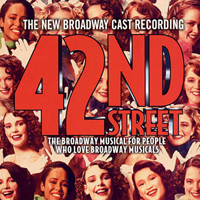 (1 / 5) Two decades after the original show was a smash, the revival did it all over again. Done in “tribute” to the original Champion staging (i.e., they stole the best parts), this 42nd Street was even more spiffed-up and brassy. There’s an intense air of overkill here, those relentless tapping feet even more threatening than in Busby Berkeley’s original “Lullaby of Broadway” number. “Shuffle Off to Buffalo,” in particular, is a vulgar nightmare, but several other cuts are also objectionable. Fortunately, a genuine star performance emerges from the excess: Christine Ebersole, who won a Tony for her work as the fading diva Dorothy Brock. Amid a herd of screechers and belters, Ebersole is the classy, real thing. For her trouble, she is rewarded (and rewards the listener) with an added song, “I Only Have Eyes for You.” Onstage, Michael Cumpsty seemed miscast in the Warner Baxter/Jerry Orbach role, and he sounds equally uncomfortable on the recording. As for Kate Levering, she serves up chilly efficiency in place of Ruby Keeler’s clunky charm. If you want modern-day Broadway brass, it’s here in spades; if you’re looking for something more, play the Ebersole tracks and then go out and rent the movie. — R.B.