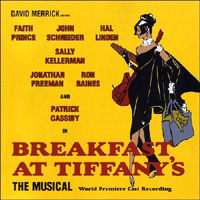 (4 / 5) This is possibly the strangest cast album ever. The show Breakfast at Tiffany’s was a notorious flop of the 1960s, undergoing tryout traumas and then flaming out after a couple of New York previews. Nobody involved knew how to adapt Truman Capote’s novella about the adventures of winsome Holly Golightly, and Philadelphia audiences expecting the fey charm of the film version (which starred Audrey Hepburn) instead got a leering sex comedy by Abe Burrows with brassy songs by Bob Merrill. In an act of desperation, producer David Merrick replaced Burrows with Edward Albee, whose weird new concept — Holly as a fictional character romancing the writer who invents her — was quickly dismissed. As the changes kept coming, Merrill kept churning out songs. This two-disc studio album, actually recorded in 1995, has 33 tracks, including the overture, entr’acte, and exit music. The notes provide synopses of both Burrows’ and Albee’s libretti, allowing you to program different versions of the score when you listen. (There are also several alternate numbers that were written on the road.) It’s a pity that all this effort wasn’t expended on a better show. The Burrows version has its moments, but even so, Holly is stripped of her charm and made into a pushy gold digger. The Albee version isn’t as crass, but is humorless, with much weaker songs. There are a few nice items, including the swingy “Holly Golightly” and “Traveling.” But too many numbers, such as “Lament for Ten Men,” “The Home for Wayward Girls,” and “The Wittiest Fellow in Pittsburgh,” are simply tasteless. (Ralph Burns’ orchestrations underline every joke, in case you’re not paying attention.) The cast features Faith Prince singing her heart out as Holly, with strong contributions by John Schneider as the writer who loves her; Hal Linden as her hayseed first husband; Ron Raines as her Mafia confidant; and, from the Broadway cast, Sally Kellerman as Holly’s friendly competitor, whose big solo, “My Nice Ways,” has a certain dirty allure. Hardcore show fans will want to give this recording a listen at least once, but don’t expect a lost masterpiece.  — David Barbour