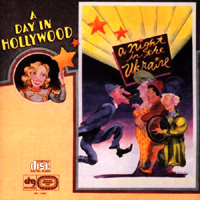 (2 / 5) Can so trite and scattershot a revue about the joys of moviegoing really have charmed Broadway audiences for 588 performances? Apparently, thanks to a bright young cast including David Garrison and a Tony-winning Priscilla Lopez, and some clever staging by Tommy Tune. But the first half, on disc at least, is dreary indeed: a salute to Richard Whiting here, a tap-danced Production Code number there, some middling additional songs by Jerry Herman (although Lopez does shine in “The Best in the World”), and only Wally Harper’s excellent piano arrangements to spice up the Dick Vosburgh-Frank Lazarus score. Things perk up greatly in Act II, a version of Chekhov’s The Bear as it might have been filmed with the Marx Brothers. Garrison is a super Groucho, Peggy Hewett a model Margaret Dumont, and “Samovar the Lawyer” (“I’m wise to all the loopholes / I haven’t any scroop-holes”) a piece of special material so funny that Groucho himself might have pounced on it. But the ingenuousness is over-peddled — young lovers Kate Draper and Stephen James are actively annoying — and, throughout, the movie satire points are excruciatingly obvious. Still, the recording does have some nice moments, mostly from Lopez and Garrison.  — Marc Miller