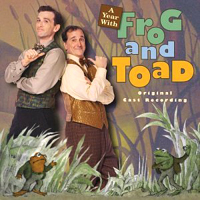 (3 / 5) Although A Year With Frog and Toad played only a short time on Broadway in 2003, previous runs at the Children’s Theatre Company of Minneapolis (where the show got started) and Off-Broadway were successful enough to yield this playful cast recording. The show is faithful to the Arnold Lobel books on which it was based, and the album documents the witty songs by composer Robert Reale and lyricist-librettist Willie Reale that perfectly capture four seasons in the lives of two amphibian friends. These roles are nicely performed by Jay Goede and Mark Linn-Baker, with Danielle Ferland, Kate Reinders (who didn’t go to Broadway with the show), and Frank Vlastnik rounding out the cast and each getting plenty of opportunity to shine. In “The Letter” and its numerous reprises, Vlastnik’s depiction of the Snail’s determination to deliver the mail is almost as funny on the recording as it was onstage; and his 11 o’clock number, “I’m Coming Out of My Shell,” is one of the score’s treasures. There are warm moments, including Goede’s touching “Alone” and the sweet “Merry Almost Christmas,” but it’s the writers’ willingness to embrace innocent fun in songs such as “Cookies” and “Getta Loada Toad” that makes this a really special show — one of the most charming new musicals in years, and one that can truly be enjoyed by the whole family. — Matthew Murray