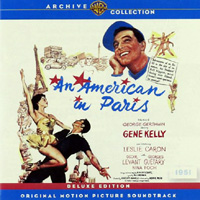 (5 / 5) In the 1990s, Turner Entertainment restored one of MGM’s greatest musicals, An American In Paris. The restoration turned up the studio session tapes of the all-Gershwin score, which led to Turner teaming with Rhino Records to release a two-disc album stuffed full of the music heard in the film as well as outtakes, underscoring, and extended and alternate versions of songs. That 1996 CD is now out of print, but in 2015, Watertower Music made it available digitally through their Warner Archives series. The songs in the film, nearly all part of the Great American Songbook, are performed by an engaging trio: Gene Kelly as Jerry Mulligan, a war vet and aspiring painter; Oscar Levant as Adam Cook, an acerbic composer; and Georges Guetary as Henri Baurel, a song-and-dance man. Kelly is at his charming best teaching English to a gaggle of Parisian kids through “I Got Rhythm” and earnestly expressing his passion for Leslie Caron in “Love Is Here To Stay.” He joins Guetary in proclaiming the joys of love (for the same girl, though they don’t know it) in “‘S Wonderful,” and goofs with Levant on “Tra-la-la.” Guetary solos in a “(I’ll Build A) Stairway To Paradise,” so rousing that you expect showgirls to parade through your room. The soundtrack is capped by the MGM Studio Orchestra, up-sized to 72 players and conducted by Johnny Green, performing the glorious 16-minute “An American In Paris Ballet.” Added material includes underscoring and medleys by the studio orchestra and Benny Green and his band, along with outtakes such as Kelly’s heartfelt “I’ve Got a Crush On You” and an incredible set of Gershwin improvisations by Levant, who was a lifelong friend of Gershwin and one of his finest interpreters. The improvs got deleted from the film in favor of another treasure, Levant’s brilliant — and in the film, highly comic — rendition of the “Concerto in F (Third Movement).” This is one of the two pieces in stereo on the album; if this album has any drawbacks, it’s the fact that most of the session tapes didn’t survive in multi-channel format, so almost all of the music is presented here in mono. But that’s a quibble. It all adds up to nearly two hours of pure Gershwin(s), and as Ira wrote, “Who could ask for anything more?” —Laura Frankos 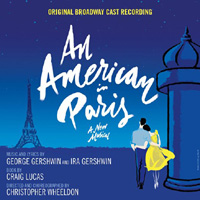 (4 / 5) Some Gershwin fans may have been wary when they heard of plans to turn the beloved film An American in Paris into a stage musical, filled out with other numbers by George and Ira. Previous attempts to create “new” Gershwin shows through similar methods had had decidedly mixed results; just look at My One And Only, Crazy For You, and Nice Work If You Can Get It.  (On second thought,  please don’t look at Nice Work If You Can Get It.) But in this case, the outcome was far better. Librettist Craig Lucas, director Christopher Wheeldon, and musical supervisor/arranger Rob Fisher crafted a show that takes its inspiration from the film but wisely doesn’t try to replicate it.  Only five numbers — the “Concerto in F,” “I Got Rhythm,” “‘S Wonderful,” “Stairway to Paradise,” and the title ballet — are in both the movie and the show, and the interpolations were chosen with an eye toward how well they fit the plot and characters. In the stage musical, the time of the action is shifted to the immediate post-WWII years, with Paris recovering both spiritually and physically. That’s clear in the first ensemble number, “I Got Rhythm,” when Henri Baurel (Max von Essen) tells composer Adam Hochberg (Brandon Uranowitz), “People need to laugh. Paris needs it.” By the song’s end, Henri has brought a snappy 4/4 beat to Adam’s dirge-like melody, and the pair have become fast friends with another fellow vet, painter Jerry Mulligan (Robert Fairchild). Enter Lise Dassin (Leanne Cope), a young ballerina destined to become the love object of all three men — another departure from the film. It’s a nice touch, making Adam much more than comic relief, and Uranowitz’s heartbreaking take on “But Not For Me” is one of the cast recording’s highlights. The full trio of male leads also provides lovely harmonies, both joyful (“‘S Wonderful”) and poignant (the 11 o’clocker “They Can’t Take That Away From Me”). Fairchild has an engaging warmth that’s most evident in “I’ve Got Beginner’s Luck” and “Liza” but also comes through in the bits of dialogue on the recording. In the film, the female roles of Lise and Jerry’s patroness, Milo, don’t get any vocals, but that’s not the case here. Cope gives us a yearning “The Man I Love” and pairs well with Fairchild on one of the Gershwins’ sweetest ballads, “For You, For Me, For Evermore.” Jill Paice, as Milo, provides sophistication and sultriness in “Shall We Dance?” and a glimpse into her heart in “But Not For Me.” As in the film, it’s the concert pieces that really complete the whole, beautifully orchestrated here by Christopher Austin; the title ballet and the “Concerto in F” (the show’s opening) are joined by the “Second Prelude” and the first act finale, which includes the “Second Rhapsody” and the “Cuban Overture.” This cast album doesn’t replace the soundtrack, but it’s not meant to. It has its own merits. — L.F.