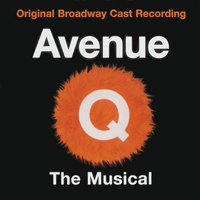 (5 / 5) What a devilishly clever parody of Sesame Street this Tony Award-winning musical is! Robert Lopez and ]eff Marx’s songs are mostly upbeat and catchy (“Everyone’s a Little Bit Racist”), yet tender when called for (“Fantasies Come True”). The guys have come up with everything from a fast, funky waltz (“My Girlfriend Who Lives in Canada”) to upbeat rock (“Purpose”) to soul (“You Can Be as Loud as the Hell You Want,” which Natalie Venetia Belcon growls perfectly). But there’s also a fine, fine melody line in “There’s a Fine, Fine Line.” The Lopez-Marx lyrics are often monosyllabically simple, which they should be for a kid’s-show spoof, yet they can also be wildly funny and raunchy. Talent-wise, along with librettist Jeff Whitty, are Lopez and Marx the real turtle soup (or merely the mock)? To quote their own creation, Lucy T. Slut: “Yeah, they’re real.” By the time you reach “Mix Tape” — a masterstroke of a song in which one puppet infers that another likes her from the songs that he’s selected and recorded on a cassette for her — you’ll realize that you don’t want a mix tape of songs from different shows, you just want the Avenue Q CD, which showcases the superbly talented ensemble cast of John Tartaglia, Stephanie D’Abruzzo, Rick Lyon, Jennifer Barnhart, Ann Harada, and Jordan Gelber, along with the aforementioned Belcon.  — Peter Filichia