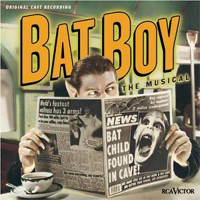 (2 / 5) Ever since Little Shop of Horrors, Off-Broadway has spawned lots of campy musical sci-fi spoofs. Bat Boy is one of the better ones, though that’s not saying much. The book, by Keythe Farley and Brian Flemming, about the discovery of an alleged “bat child” is a convoluted tale of small-town viciousness, family secrets, and incest, all played for marginal laughs. Still, the wildly uneven score by newcomer Laurence O’Keefe is worth your attention. Interestingly, the most ambitious passages are the most successful. The comic”Show You a Thing or Two”is a mini-masterpiece in which the bat boy, renamed Edgar, is transformed into an Anglophile whiz kid; anyone who can work Ruby Ridge, Cole Porter, and The Remains of the Day into a lyric is OK by me. Also nifty is the first-act closer, “Comfort and Joy,” which advances the plot with speed and wit. And the ballad “Let Me Walk Among You” weds a touching melody to hilariously deadpan lyrics. So how can O’Keefe have also written junky numbers like “Another Dead Cow,” in which the townspeople wonder who killed their livestock, or the tasteless “Children, Children,” an inter-species sex orgy? Similarly, the orchestrations by O’Keefe and Alex Lacamoire range from clever to crass. In the title role, Deven May has a powerful voice and a light comic touch. There’s also skillful work from Kaitlin Hopkins as Edgar’s adoptive mother — her “Three-Bedroom House” brings down the house — and from Kerry Butler as his innocent love interest. Steel yourself for the worst of the score and prepare to enjoy the best.  — David Barbour