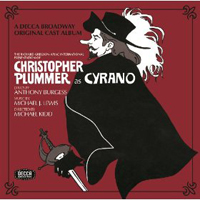 (4 / 5) This musical, based on Edmond Rostand’s Cyrano de Bergerac, boasts a wonderful translation and adaptation by Anthony Burgess, whose exquisitely poetic book and lyrics hew closely to his translation of the classic play. Also outstanding is the music of Michael J. Lewis — melodic, stirring, and well suited to the story, even if the orchestrations and arrangements fall short. Christopher Plummer gave one of his greatest performances as Cyrano, but the beautiful score is not well served by his singing. On the other hand, Leigh Berry as his love interest is an excellent vocalist; her “You Have Made Me Love” is, in fact, one of the finest renditions of a musical theater ballad ever recorded. This gorgeous, relatively unknown song is a gem as worthy of fame as “Some Enchanted Evening,” for it’s just as romantic and stirring. Mixed like a 1960s pop album, the recording has a tinny sound quality and lacks the vibrancy of the stage performance. But it does include much of the show’s dialogue, magnificently acted by Plummer, who justly won a Tony Award for his performance. One can only hope that Cyrano will someday be revived with an actor of Plummer’s caliber in the leading role. — Gerard Alessandrini