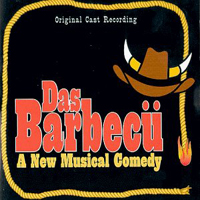 (3 / 5) This is a country-western musical takeoff on Richard Wagner’s Der Ring des Nibelungen, set in Texas. It’s one-of those cases where the show stands on its own but you’re likely to enjoy it more if you’re familiar with the source material. Das Barbecü is filled with clever songs by composer Scott Warrender and lyricist Jim Luigs. The tone is firmly established by the toe-tapping opening number, ”A Ring of Gold in Texas.” Other titles — “Hog-Tie Your Man,” “Rodeo Romeo,” “Slide a Little Closer” — are clues to what the listener is in for. The score also includes some nice ballads, such as “County Fair,” “River of Fire,” and “Wanderin’ Man.” Helping to make this recording highly listenable are the first-rate singing actors Julie Johnson, J. K. Simmons, Jerry McGarity, Sally Mayes, and Carolee Carmello, all of whom play multiple roles including Wotan, Siegfried, Fricka, Brünnhilde, Gutrune, and Alberich. — Michael Portantiere