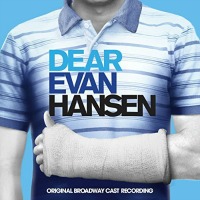 (4 / 5) A musical that unapologetically wears its heart on its sleeve, Dear Evan Hansen is the most high profile theater work to date from the songwriting team of Benj Pasek and Justin Paul. Set in a nondescript modern suburb, the show centers around a high school introvert with intense anxiety issues who finds himself involved in a misunderstanding which, partly due to the double-edged sword of social media and its galvanizing impact, snowballs into a giant lie that does both good and harm. Though the character of Evan is a little too broadly painted in his neuroses, and the show’s commentary on the effect of social media in modern culture doesn’t go quite as deep as it should, Pasek and Paul’s score is memorable and compelling, managing to wax poetic without being too on-the-nose in its imagery. Ben Platt, in the title role, does the majority of the vocal heavy lifting here, delivering a fully rounded and thrilling performance. It helps that he’s given the best songs in the score: the show’s biggest hit, “Waving Through a Window,” as well as the crushing “Words Fail” and the lovely if slightly heavy-handed “For Forever.” Platt is well supported by Rachel Bay Jones as Evan’s endearing, struggling, single mother; and Laura Dreyfuss, refreshingly understated as Zoe, the object of Evan’s affections, who may be harmed most by Evan’s lie. The cast album includes minimal dialogue, opting instead to present each song as a stand-alone item. While this doesn’t harm the flow of the recording, and has helped a few of the songs to break out as popular hits, two songs suffer from such treatment: “Good For You,” a cathartic release of Evan’s mom’s pent-up frustration, here plateaus in its anger, with no release; and the offbeat humor of “Sincerely Me” comes across as somewhat tasteless out of context. That said, the rest of the album works very well. Alex Lacamoire’s orchestrations (with additional work by Christopher Jahnke) are appropriately pop-oriented, and Justin Paul’s vocal arrangements never go overboard with vocal pyrotechnics. The restraint in their work separates DEH from many other contemporary scores, allowing the emotional weight of the piece to really resonate with the listener. And there are plenty of emotions here to resonate. — Matt Koplik