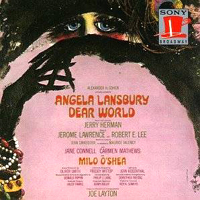 (2 / 5) Jerry Herman would seem to be the least likely composer to musicalize Jean Giraudoux’s The Madwoman of Chaillot, but he took on the challenge. The result, Dear World, was a four-month Broadway flop in 1969, although Angela Lansbury won her second Tony Award for her performance in the starring role. The cast recording reveals a score that’s schizophrenic but far from unappealing; Herman’s songs are tuneful, buoyant, and often evoke France, even if they seldom capture the atmosphere that infuses Giraudoux’s original play. There’s a rousing curtain raiser (“The Spring of Next Year”), a comic list number (“Garbage”), an infectious title song, and a curtain-call medley — all staples of Herman’s musical comedy oeuvre, but all somewhat out of place here. (The lovely ballad “I’ve Never Said I Love You” also seems out of place, yet Pamela Hall’s winning performance makes it forgivable.) Some of the other songs are more successful, particularly Lansbury’s emotionally surging “I Don’t Want to Know” and the hilarious overlapping trio of numbers sung by Lansbury, Jane Connell, and Carmen Mathews in the second act’s mad tea party. Every song, regardless of appropriateness, benefits from conductor Don Pippin’s vocal arrangements and Philip J. Lang’s orchestrations. Still, “Mame meets Madwoman” was a gambit never destined for success onstage or on disc.  — Matthew Murray