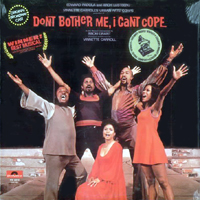 (2 / 5) Here’s an example of the sort of show that’s much more effective onstage than on record. It was easy to get caught up in a live performance of this revue, which sometimes seemed like a revival meeting. As recorded, though, Don’t Bother Me, I Can’t Cope emerges as little more than a collection of R&B numbers, all presented with the same intensity. There’s a tremendous sameness to the material. Micki Grant, who won great acclaim for her songs (and who later wrote some of the best material in Working), heads the cast, which also includes Alex Bradford, Hope Clarke, Bobby Hill, and Arnold Wilkerson.  — David Wolf