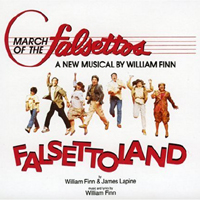 (5 / 5)  Although the second and third installments of William Finn’s “Marvin Trilogy” were originally produced nine years apart (the first installment was titled In Trousers), they’re now better known as the united work Falsettos, which reached Broadway in 1992. The closest thing we have to a cast album of that show is this two-disc set of material that eventually made up its two acts, but the recordings don’t preserve the rewrites that were made for Broadway. These are, nevertheless, definitive performances of Finn’s brilliant scores. There will probably never be a better Marvin than Michael Rupert, a better Whizzer than Stephen Bogardus, or a better Mendel than Chip Zien. Alison Fraser’s Trina in March of the Falsettos is only slightly superior to Faith Prince’s Trina in Falsettoland. James Kushner and Danny Gerard, as the two iterations of Marvin and Trina’s young son Jason, are both terrific, and so are Heather MacRae and Janet Metz as the “lesbians from next door.” The scores are sublime; Finn was adept at crafting both quirky patter songs and beautiful melodies. It’s impressive that the man who wrote “Four Jews in a Room Bitching” (a great opening number), “Please Come to My House,” and “Days Like This” was also responsible for “The Games I Play,” “Father to Son,” “What More Can I Say?” and the astounding “What Would I Do?” among myriad other songs on both ends of the spectrum. — Seth Christenfeld