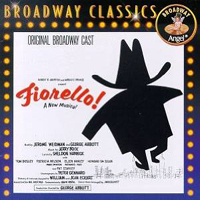 (5 / 5) In an earlier era of musical theater, it was not uncommon for an overture to start with a sound effect. Here, we have the sound of a fire-engine siren, appropriate for a musical about the New York City mayor who famously showed up at fires riding with the firemen. Fiorello! tied with The Sound of Music for the Tony Award for Best Musical, and won the Drama Critics’ Circle Award and the Pulitzer Prize for Drama. Guided by veteran George Abbott, who directed and co-wrote the book, the show featured the second Broadway score by composer Jerry Bock and lyricist Sheldon Harnick. (Their first, The Body Beautiful, wasn’t recorded.) The Fiorello! score displays an excellent feel for both period and character. While none of the songs ever achieved popularity outside of the show, many are Broadway classics. The numbers are evenly distributed among the principals, and the story is fairly easy to discern by listening to this album. In the title role, Tom Bosley isn’t required to sing much; there’s his campaign song, “The Name’s LaGuardia” (which he sings in three languages!), and he leads the energetic female ensemble in “Unfair!” Bosley also makes an impact with some brief but moving dialogue during the finale. As his long-suffering secretary Marie, Patricia Wilson is outstanding, especially in the bracing “The Very Next Man.” In the role of a political boss, Howard Da Silva leads the strong-voiced men’s ensemble (listen for the distinctive baritone of Ron Husmann) in the showstopper “Little Tin Box.” Da Silva and the men also shine in the plot-driven “Politics and Poker” and “The Bum Won,” a contrapuntal, post-election lament. As Fiorello’s first wife, Thea, Ellen Hanley uses her creamy soprano for nostalgia in “Til Tomorrow” and for mature romanticism in “When Did I Fall in Love?” “I Love a Cop” is charmingly sung by Pat Stanley, and “Gentleman Jimmy” is belted out by Eileen Rodgers. — Jeffrey Dunn