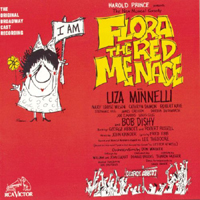 (3 / 5) John Kander and Fred Ebb’s first show together tells the story of Flora Meszaros (Liza Minnelli), who is thrilled to get a garment-district job during the Depression and even more thrilled to find a boyfriend in Harry Toukarian (Bob Dishy). She isn’t thrilled to find that he’s a Communist, but Flora doesn’t seem to experience much more than mild embarrassment over this state of affairs. There are three wince-inducing songs here (“Knock, Knock,” “Palomino Pal,” and “Hello, Waves”), but ”A. Quiet Thing” and “Sing Happy” are stunners, especially as delivered by Minnelli when she was young and full of potential. Don Walker’s orchestrations enhance the songs, and the overture — which was actually the entr’acte in the theater — is swingin’. — Peter Filichia 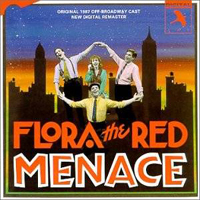 (2 / 5) More than two decades after the failure of Flora, Kander and Ebb — and new book-writer David Thompson — reworked the show for a revival at the Vineyard Theatre, where it was staged in the manner of a Federal Theatre Production of the 1930s. The recording of the revised version would be the reference for any new production, but if you’re only interested in hearing the score, you need not buy this disc, which is quite inferior to the original album. Granted, three of the show’s silliest songs have been excised, and it’s nice to have an extra snippet of a song before “A Quiet Thing,” a verse for “Dear Love,” and some good dialogue leading into “Sing Happy.” But Veanne Cox and Peter Frechette are limp substitutes for Minnelli and Dishy. While John Kander himself plays the piano, his solo accompaniment can’t compare with the original disc’s lush, full orchestra. “The Kid Herself’ track makes it clear why the song was dropped from the original production. Worst of all, a most annoying thematic melody, which would have been a chore to hear even once, interrupts the action six times! — P.F.