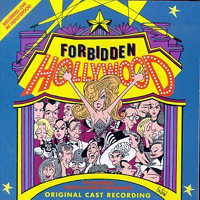 (3 / 5) Here, Gerard Alessandrini has as much fun with Hollywood excess as with Broadway idiocy. But this recording differs from the Forbidden Broadway albums in one crucial respect: It’s live, and that’s a mistake. The audience keeps howling at sight gags listeners can’t fathom (like Dietrich’s arm falling off in “Falling Apart Again”). The satirical targets are a little strange, too; some numbers aim at movies that were new at the time (Braveheart, Pulp Fiction, Forrest Gump), but nearly half the material clobbers various aspects of decades-old film version of classic Broadway musicals — the color filters in South Pacific, Barbra Streisand’s miscasting in Hello, Dolly! That said, much of it is a riot, and Jason Graae’s impression of Brando singing is as hilarious the twentieth time as the first. Gerry McIntyre is a flawless Louis Armstrong, a funny Whoopi Goldberg, a catatonic Keanu Reeves, and more. Christine Pedi, an unparalleled Liza in several Forbidden Broadways, gets unusually rich material here (“Mein Film Career”). And Suzanne Blakeslee, as Marni Nixon dubbing Audrey Hepburn, does justice to one of the funniest pieces of material Alessandrini has ever written.  — Marc Miller