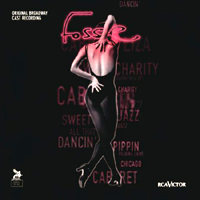 (3 / 5) Bob Fosse captured the revolutionary sexual politics of the 1960s and 1970s in a voluptuous mix of dance forms based on jazz, tap, and ballet. The show that bears his name traces, although not in chronological sequence, his choreographic career from The Pajama Game (1954) to Big Deal (1986). Fosse was conceived by co-directors Richard Maltby, Jr. and Ann Reinking, along with Chet Walker, who’s credited as having recreated the master’s choreography for the occasion. When the show arrived on Broadway from Toronto after tryouts in Boston and Los Angeles, it proved to be an eye-popping amalgam of ultra-fit Broadway dancers like Jane Lanier and Scott Wise, slick design elements by Santo Loquasto and Andrew Bridge, and amazing choreography overseen by Reinking, Walker, and “artistic advisor” Gwen Verdon. The show’s score is a compilation of numbers from theatrical and non-theatrical projects to which Fosse was attached, including a 1968 Bob Hope television special and the unsuccessful 1974 movie musical of Antoine de Saint-Exupery’s The Little Prince. The cast recording is highly enjoyable: The numbers, written by various composers and lyricists, create a clear sense of what the opening ensemble terms “Fosse’s World,” and the melodies, rhythms, and lyrics, lovingly recorded by record producer Jay David Saks and legendary A&R man Bill Rosenfield, stand admirably on their own as an aural counterpart to Fosse’s dance vocabulary. The vocal performances and a 21-person pit band, under the baton of musical director Patrick S. Brady, display the level of professionalism that distinguishes Broadway at its best from musical theater anywhere else in the world. The cast album is capped with a thrilling arrangement (over 13 minutes’ worth) of Louis Prima’s “Sing! Sing! Sing!”, seemingly all brass and percussion, that would still leave the listener wanting more at four times its length.  — Charles Wright