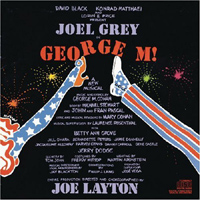 (4 / 5) This is a brassy, heart-pounding, and ear-pounding show based on the life and songs of the great showman George M. Cohan. The title role is played by Joel Grey, fresh from his triumph in Cabaret and at the height of his talent. He delivers a brash, charismatic performance. The cast recording was spectacularly well produced by the young Thomas Z. Shepard; the orchestra and chorus sound so huge and exciting that playing the album is like setting off a box of fireworks in your living room. As with fireworks, you should beware: Although the brassiness of the score is certainly not inappropriate for the flag-waving aspects of the story, it’s sometimes monotonous, and it shortchanges the softer, more charming aspects of the era it’s trying to evoke. But “Give My Regards to Broadway,” “Over There,” and other Cohan hits are as infectious as ever, and the dance music is thrillingly arranged. The overture and the instrumental “Popularity” are alone worth the price of the album, which also offers the joy of hearing Bernadette Peters early in her career. It’s easy to understand why her unique voice catapulted her to stardom. The recording contains many delightful Cohan songs that aren’t featured in the famous bio-film Yankee Doodle Dandy and are hard to find elsewhere; the epilogue track is full of forgotten but wonderful numbers such as “The American Ragtime” and “It’s All in the Wearing.” Their presence makes the album even more appealing.  — Gerard Alessandrini