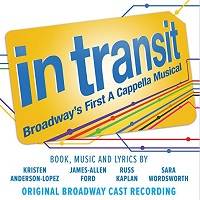 (2 / 5) One wants to applaud In Transit, Broadway’s first a cappella musical, about the semi-connected lives of a small group of New Yorkers played out within and around the subway system. The cast is enthusiastic; the vocal harmonies, arranged by Pitch Perfect’s Deke Sharon, are amazing; Steven “HeaveN” Cantor and Chesney Snow, alternating as beatbox performer Boxman, are percussive wizards; and there are happy endings for the characters. “But, ya know, whatever,” as someone in the show says at one point. The score never really gels, although the writers — Kristen Anderson-Lopez, James-Allen Ford, Russ Kaplan, and Sara Wordsworth — try to convince us that it’s not the destination, it’s the journey that matters most. Journeying “Deep Beneath the City” are Jane (Margo Seibert), slaving in a office while her Broadway dreams fade; her agent, Trent (Justin Guarini), who’s preparing to marry Steven (Telly Leung), although he hasn’t even told his fundamentalist Momma (Moya Angela) that he’s gay; Trent’s friend, Ali (Erin Mackey), newly dumped by her boyfriend; and Ali’s brother, Nate (James Snyder), unemployed and attracted to Jane. (Boxman doesn’t commute. He has found his calling as a subway guru. )Jane’s story arc, while clichéd, comes off best.  “Do What I Do” will resonate with anyone stuck in a survival job, and Seibert nails “Getting There,” taking Boxman’s advice to heart. The gay love story is genuine, if bland. Family conflict is set up in the country-flavored “Four Days Home,” and Guarini conveys Trent’s pain when he realizes Momma is deliberately “Choosing Not to Know.” Mackey gets the ultimate 21s-century list song, “Saturday Night Obsession,” cyber-stalking her ex to hilarious comments from the back-ups. In addition to her moments as Momma, Angela unleashes her belt as grumpy subway both clerk Althea and as Jane’s boss. Her sardonic “A Little Friendly Advice” is one of the score’s strongest numbers. But, as a dramatic whole, In Transit would have benefited from more depth of story than a metaphor told in a few vignettes. — Laura Frankos