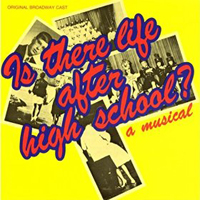 (5 / 5) If this show had opened Off-Broadway instead of on Broadway in 1982, it might have run a lot longer.  Is There Life After High School? represents some of the best work of Craig Carnelia, an extraordinarily talented composer-lyricist who later wrote lyrics only to Marvin Hamlisch’s music for the score of Sweet Smell of Success. With a book by Jeffrey Kindley, the show is about the painful, wonderful experience of high school as viewed in retrospect by a group of young adults. The opening (and closing) number, “The Kid Inside,” is a highlight; the song offers spot-on observations about grown-ups who cling to their inner children, and the soaring musical phrase that’s sung to the words “There (s)he goes again” is a real ear worm. Among the show’s cleverest sequences is “Second Thoughts,” in which five people wonder what would have happened if they’d said or done things differently at pivotal moments in high school. Another standout is the beautiful song in which four women recall every detail of their earliest romantic encounters, even though “Nothing Really Happened.” Then there’s the hilarious ”I’m Glad You Didn’t Know Me” (in high school), sung by a couple to each other. (“Picture a phony / Doin’ the pony,” she sings; “Speaking of fears / I had an erection the whole four years,” he admits.) But the most precious gem of the score is probably “Fran and Janie,” a gorgeous tearjerker about two inseparable high school friends encountering each other years later. The estimable performers are Harry Groener, Maureen Silliman, Alma Cuervo, Sandy Faison, Raymond Baker, Cynthia Carle, David Patrick Kelly, Philip Hoffman, and James Widdoes.  — Michael Portantiere