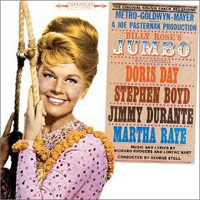 (3 / 5) In these days of multi-million-dollar Broadway mega-musicals, it’s interesting to note that a 1935 show nearly created a scandal because it was budgeted at $350,000. High-rolling producer Billy Rose was responsible for that near-obscene outlay of cash, which he lavished upon a musical spectacle — literally a circus — called Jumbo. It ran at the mammoth Hippodrome, refitted as a three-ring arena for a production that featured a number of circus acts, a Romeo-and-Juliet-under-the-big-top plot, the antics of Jimmy Durante, and a wonderful score by Richard Rodgers and Lorenz Hart. The show was too expensive to recoup its investment, and it soon passed into legend, but three of its songs — “My Romance,” “The Most Beautiful Girl in the World,” and “Little Girl Blue” — became standards. When Jumbo made it to the screen in 1962 (with Billy Rose’s name included in the title), not even the world’s top box-office draw, Doris Day, could turn the film into a financial success. Nevertheless, the soundtrack recording is bouncy and enjoyable, with Day in strong voice. Durante repeated his stage role, and his reprise of “The Most Beautiful Girl in the World” is captivating. Martha Raye is a delight as his long-suffering fiancée. Most often remembered as a wide-mouthed clown, Raye was an accomplished vocalist; this becomes clear when she duets with Day in “Why Can’t I?”,  one of several R&H interpolations. Leading man Stephen Boyd’s songs were dubbed by the strong-voiced James Joyce (how’s that for an Irish name?), and the score was further padded with Roger Edens’ “Sawdust, Spangles, and Dreams.” Since there is no cast album of the stage production of Jumbo, it’s nice to have selections from the entertaining film soundtrack on disc. — Richard Barrios