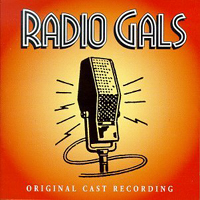 (2 / 5) In this comedic concept musical by Mike Craver and Mark Hardwick, we’re supposed to be hearing a radio broadcast emanating illegally from the home of an Arkansas matron in 1927. (This recording documents the premiere staging or Radio Gals in Pasadena; the show subsequently had a brief run Off-Broadway.) Although no plot synopsis is included, the song titles almost speak for themselves: “Aviatrix Love Song,” “Fairies in My Mother’s Flower Garden,” and the immortal “That Wicky Wacky Hula Hula Honka Wonka Honolulu Hawaiian Honey of Mine.” These are interspersed with jokes about “Doc May and His Musical Goats” and a series of commercials for “Horehound Compound.” All in all, it’s a heapin’ helpin’ of folksy humor. While Radio Gals was amusing onstage, the cast album has a somewhat cloying effect; but there are some priceless bits, such as “The Tranquil Boxwood,” consisting of crashing piano chords reminiscent of the work of Béla Bartok. And there is considerable musical cleverness to be found in the songs “Edna, the Elephant Girl,” “Dear Mr. Gershwin,” and “Buster, He’s a Hot Dog Now.” For some reason, Craver and cabaret luminary Mark Nadler are cast as women. But the oddly named Helen Geller is effective as Hazel Hunt, mistress of the airwaves, and she and the rest of the cast sing well. This show is made up entirely of novelty material, totally unconnected to any plot. Fans of the down-home whimsy heard on NPR’s Prairie Home Companion will probably appreciate Radio Gals more than the average musical theater aficionado. — David Barbour