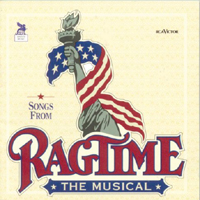 (4 / 5) One of the great gems of the American musical theater, Ragtime is replete with beautiful performances on this first recording of the magnificent score by Stephen Flaherty (music) and Lynn Ahrens (lyrics), which was released to coincide with the show’s world premiere in Toronto. Most of the principals heard here — Brian Stokes Mitchell, Marin Mazzie, Peter Friedman, Audra McDonald, and others — were also in the Broadway production two years later. (Camille Saviola, this album’s Emma Goldman, was not.) In contrast to the subsequent Broadway cast album, “Songs from Ragtime” gives us only highlights of the score; the show’s major musical moments are performed movingly by the stellar cast. The recording also contains some material that didn’t make it to New York: “The Show Biz” (a song for Evelyn Nesbit and Houdini) and the stirring original bridge for “The Night That Goldman Spoke at Union Square.” Since this album was made and released while the show was still being developed, it’s somewhat lacking in theatricality, yet there is a decided freshness about it. — Gerard Alessandrini 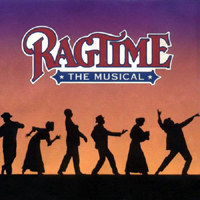 (5 / 5) This spectacular, complete recording of the Ragtime score documents what few other musicals have achieved: The show actually improves upon its source material, in this case, a best-selling novel by E.L. Doctorow. As adapted by librettist Terrence McNally, lyricist Lynn Ahrens, and composer Stephen Flaherty, Ragtime includes almost every vivid character and gripping plot point of the epic novel while expanding the emotions of the story with a superb score that underlines the sociological thrust of the story to great effect. Unfortunately, the show did not receive the critical kudos and mass popular acceptance that it deserved during its Broadway run, but this recording adds greatly to its legacy. Brian Stokes Mitchell has the role of a lifetime as Coalhouse Walker; his finely balanced mix of haughtiness and optimism turned to disillusionment is so compelling that a potentially unsympathetic character is transformed into a heartbreaking, tragic figure. Marin Mazzie’s performance as Mother, who reacts nobly to a changing world, is just as expertly acted and sung, and is the emotional heart of the musical. Audra McDonald is phenomenal as Sarah, one of the six roles for which she has won Tony Awards (as of this writing). Judy Kaye is stellar as Emma Goldman; so are Peter Friedman, Mark Jacoby, Lynette Perry, and Steven Sutcliffe as Tateh, Father, Evelyn Nesbit, and Mother’s Younger Brother, respectively. This two-CD cast album includes two numbers that were added to the show on its way to Broadway: “Atlantic City” brings pageantry and fluff to the proceedings, while “Sarah Brown Eyes” is a tender musical moment for Mitchell and McDonald. Offered as an appendix is a beautiful “symphonic portrait” of Ragtime. — G.A.