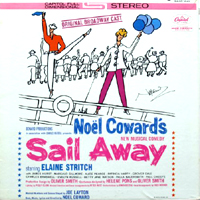 (4 / 5) Which musical has the best opening and closing numbers for its star? A good bet is Noël Coward’s Sail Away. The show-stopping songs, written expressly for Elaine Stritch, are “Come to Me” and “Why Do the Wrong People Travel?” Stritch is a stitch as a “professional pepper-upper” cruise director on an ocean liner, and her material is a hoot. Listen and guffaw at “Useful Phrases,” Coward’s clever parody of foreign guidebooks that give translations of sentences no one ever needs (“Please bring me some rhubarb”). Savor “The Little Ones’ A-B-C,” in which Stritch grapples with her passengers’ children. And when romance comes her way, the star is utterly convincing and tender singing “Something Very Strange.” Yes, the “Beatnik Love Affair” number, performed by Grover Dale, is an embarrassing attempt by Coward to be au courant. James Hurst is a disappointment as Stritch’s young lover — he’s supposed to be a breath of fresh air, but comes across as uptight — and Patricia Harty is simpering as the show’s soubrette. Still, Stritch keeps things happily afloat, so jump aboard for a good listen. — Peter Filichia 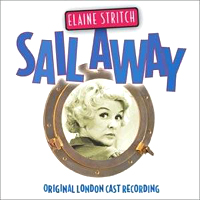 (3 / 5) A year after the show’s disappointing Broadway run of only a few months, Sail Away crossed over to London, where it was slightly more appreciated. Stritch was still strong at the helm, with David Holliday showing panache as her lover. One of the better songs on the original album, “The Little Ones’ A-B-C,” is missing here. But this recording does have one word more, “ass” — which, on the more demure Broadway album, was replaced by a trumpet bleat in “Why Do the Wrong People Travel.” Another addition is “Bronxville Darby and Joan,” a witty ditty for two minor characters that was cut from the New York staging, restored in London, and included here. Sadly, Irwin Kostal’s superb orchestrations have yielded to new, inferior charts by a person who is uncredited. We can understand why the culprit chose to remain anonymous. — P.F.