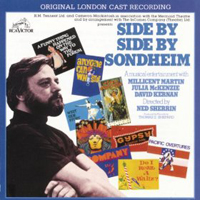 (2 / 5) When Side by Side by Sondheim opened in London, it was warmly received, as half of Sondheim’s shows had not yet been seen in the West End. In New York, where the material was much more familiar, the show still had a healthy Broadway run with the transplanted London company. The cast album reminds us how very fine these songs are; each included number from Sondheim’s pre-1977 shows, from West Side Story (music by Leonard Bernstein) to Pacific Overtures, is an extraordinary piece of work. Yet, with all of the Sondheim cast albums available, there’s little reason to revisit this one. Why, for instance, opt to hear Julia McKenzie and two pianists perform “Losing My Mind” when we can hear Dorothy Collins and the gorgeous Jonathan Tunick orchestrations on the original Broadway cast recording? Millicent Martin has her moments here, particularly in “I Never Do Anything Twice” from the film The Seven-Per-Cent Solution, but her renditions of other songs simply can’t compare with recordings of the original performances. David Kernan, who conceived the show, is the third and least interesting member of the cast. — David Wolf