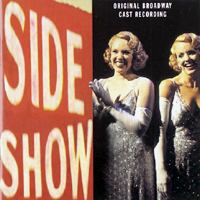 (2 / 5) Based on the lives of Daisy and Violet Hilton, twins who were born joined at the hip and who had minor show business careers that exploited their oddity, Side Show was one of the most overwrought musicals of its era. On Broadway, the exciting staging by Robert Longbottom distracted from all the heavy emoting; here, you have to deal head-on with the exhausting score by Henry Krieger (music) and Bill Russell (lyrics).  The book, by Russell, follows the sisters as they fall in love with a pair of promoters, achieve mainstream celebrity, then realize that they will never find happiness in marriage. It’s a touching story undermined by hysterical dramatics and weepy ballads that harp on the loneliness of carnival freaks. Krieger’s score is melodic, but every number is pitched at finale level, and Russell’s lyrics consistently skirt the ridiculous. The acid test is the number “Tunnel of Love,” in which the twins take a spin on the anonymous amusement park ride along with their boyfriends, hopeful of having sex in the dark. Alice Ripley and Emily Skinner are excellent as Violet and Daisy, screaming their heads off as the score demands. Jeff McCarthy and Hugh Panaro are okay as their men, Norm Lewis offers powerful vocals as a factotum who loves Violet, and Ken Jennings strikes sinister notes as the creepy sideshow boss. — David Barbour