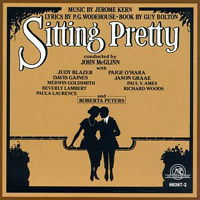 (3 / 5) Conductor John McGlinn is the one to thank for this recording of Sitting Pretty, a 1924 flop created by that legendary trio responsible for so many intimate, gentle musical comedies: composer Jerome Kern, librettist Guy Bolton, and lyricist P. G. Wodehouse. The plot, about orphaned twins mixing with the Long Island set, is a trifle; and the score, though easy to take, is overstuffed with what Lehman Engel would call “I want” songs, in which the characters wish that they were on a desert island, in a Congo paradise (several numbers in the show would give the P.C. police pause), or back in Sing-Sing. Wodehouse’s lyrics largely lack his usual curveballs: “A year from today, when I come back to you / The sun will be shining, the sky will be blue” must have sounded lame even in 1924. But there are some choice musical moments, courtesy of Kern, as when “The Enchanted Train” (a tribute to the Long Island Railroad) launches into a full-throttle orchestration, when “Shufflin’ Sam” quotes audaciously from the New World Symphony, and when “There Isn’t One Girl” takes some wild melodic leaps. The cast, led by Paige O’Hara and Judy Blazer, knows its stuff — O’Hara even delivers the lyrics in a slightly stilted fashion, as a 1920s vocalist might have done — and Roberta Peters drops in for a touching solo. The generous dialogue samplings reveal an uninteresting story, and the delivery is too cutesy by half. Still, this is an excellent recording, with bonus tracks. (An instrumental titled “All the World Is Dancing Mad” is irresistible). — Marc Miller