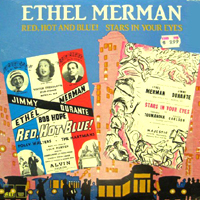 (3 / 5) The first musical with a score by composer Arthur Schwartz and lyricist Dorothy Fields, Stars in Your Eyes reunited Ethel Merman and Jimmy Durante, who had worked together in Cole Porter’s Red, Hot and Blue. While Stars ran for only a few months, Merman recorded four of her songs with the show’s musical director Al Goodman and his orchestra. “A Lady Needs a Change” is typically sassy, brassy Merman, but the other three numbers — “This Is It,” “I’ll Pay the Check,” and “Just a Little Bit More” — require her to dig a little deeper than usual, and she’s more than up to the challenge. Clear-voiced and impassioned, she makes these songs her own. Richard Smart, who was not in the show, sings “All the Time” and “Terribly Attractive,” and Al and Lee Reiser offer an instrumental medley. It’s nice to have seven numbers from this mostly forgotten musical preserved in this collection, paired with songs from Red, Hot and Blue. (Not included here is a radio broadcast recording of Merman and Durante doing their show-stopping “It’s All Yours,” but you can find it on Ben Bagley’s Arthur Schwartz Revisited album.) — Jeffrey Dunn