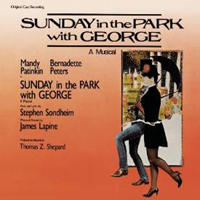 (4 / 5) Few Broadway composers could successfully make a painting into a musical, but Stephen Sondheim turned Georges Seurat’s “A Sunday Afternoon on the Island of la Grande Jatte” into one of his most unforgettable and distinctive works. In essence, Sunday in the Park With George is a meditation on the nature of art as viewed in the past (Seurat in the first act) and the present (his descendant, named George, in the second). Although the show has been criticized for the disparity in style between its two acts, each informs the other to create a cohesive whole, and the score has real depth and color. Sondheim reflects Seurat’s unique painting style through the use of staccato notes, playing with the various hues of music much as the artist worked with pigments. Songs such as “Color and Light” and “Finishing the Hat” are particularly remarkable in sound and texture. A few of the compositions are slightly more conventional: “We Do Not Belong Together,” the aching cry of Seurat’s mistress, Dot; the beautiful “Beautiful,” for Georges and his mother; and the rapturous Act I finale “Sunday,” during which the painting finally comes to life. The second act begins with the amusing “It’s Hot Up Here,” sung by the characters in the painting, followed by the brilliant musical scene “Putting It Together” (about George’s fundraising attempts), “Children and Art” (about what we leave behind when we die), and “Lesson #8” (about the constantly mutating nature of art and life). As Georges/George and Dot, Mandy Patinkin and Bernadette Peters do some of the finest work of their careers, leading an excellent company through the score’s intricacies. Sunday is one of Sondheim’s finest achievements, though it may require several hearings to be fully appreciated. — Matthew Murray