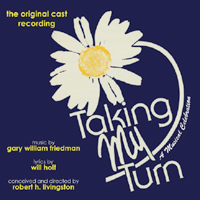 (4 / 5) This show managed only a brief run — not because there was anything wrong with the writing or the production, but perhaps because the general public didn’t think it wanted to see a musical about old people. Well, that was their loss: Taking My Turn is full of wonderful songs by composer Gary William Friedman and lyricist Will Holt. The show has no over-arching plot; it’s really a revue about various facets of the lives of seniors, from retirement to sex after 60, performed by an excellent cast. The famous 1940-’50s pop singer Margaret Whiting and film musical dubber extraordinaire Marni Nixon were still in terrific voice at the time of this show and the cast recording. Nixon shines in “Vivaldi,” about a nighttime concert in Central Park, while Whiting brings great depth of feeling to “In April,” a mother’s lament over the death of her son. The female company also includes Cissy Houston (mother of Whitney) and Sheila Smith (who had been seen on Broadway in such shows as Follies and Sugar). The men — Tiger Haynes, Victor Griffin, Mace Barrett, and Ted Thurston — are equally strong. — Michael Portantiere