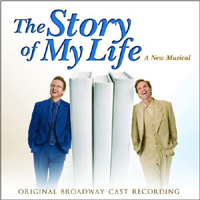 (3 / 5) The Story of My Life is an intimate, unusual, two-character musical with songs by Neil Bartram and book by Brian Hill. The strengths of the cast album lie in two talented performers, a score that’s lovely, evocative, and emotional, and the show’s highly original premise about friendship and the art of creative writing. Yet that very premise also shackles the piece, for the audience isn’t sufficiently exposed to other aspects of the lives of the characters, creating distracting questions that are never fully answered. Thomas Weaver (Will Chase), a successful author, returns to his hometown to write the eulogy for his one-time best friend, Alvin Kelby (Malcolm Gets). Alvin appears in Thomas’s mind, taking him back to when a thoughtful first grade teacher brought them together (“Mrs. Remington”). The score soars in its early numbers, charting how the pair bond over a shared love of books (Alvin’s dad owns a bookstore) and the film It’s a Wonderful Life. Bartram displays a solid grasp of childhood perspective, and Chase and Gets — even as only heard on this recording — magically transform themselves into schoolboys, exchanging gifts and creating traditions. (Check out the way Chase’s voice cracks in “1876.”) When the boys hit adolescence, it hits back; Thomas rightly worries that Alvin’s “odd” behavior, including an obsession with his dead mother’s bathrobe, might not go over well in high school (“Normal”). Bartram and Hill subtly reveal the differences that will later fracture this friendship, but the show doesn’t work as well once the men reach adulthood. Thomas attends college, writes bestsellers, and gets engaged, while Alvin apparently has no existence beyond the bookstore. Thomas increasingly edits his friend out of his life, culminating in the shocking “Independence Day” — and then he develops writer’s block. He has rejected Alvin, so now his muse has abandoned him. Here’s where the questions start — not the one concerning Alvin’s death, which Bartram and Hill rightly keep a mystery, as it leads to Thomas’s catharsis. But what about Thomas’s fiancée, Ann? Unlike the brief but fully realized portraits of Mrs. Remington and Alvin’s parents, she’s a cipher. And are we supposed to accept that everything Thomas has written has derived from his experiences with Alvin? In the hands of less talented performers, this slight framework might crumble, but Chase keeps Thomas attractive even when he’s being a jerk, and Gets’s Alvin skillfully morphs from neurotic kid to crushed soul to the ghost whose nagging gets his friend back on track. — Laura Frankos