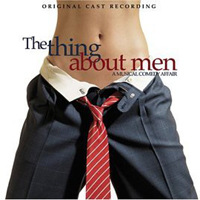 (3 / 5) A sort of musical fairy tale for adults, The Thing About Men is based on Doris Dorrie’s German film Männer. It shows us what happens when a philandering advertising executive (Marc Kudisch) becomes the roommate of the bohemian artist (Ron Bohmer) with whom his wife (Leah Hocking) is having an affair. With music by Jimmy Roberts and lyrics and book by Joe DiPietro, the show is an ingenious marriage of uptown and downtown sensibilities. The first act finale, “Downtown Bohemian Slum,” brings a breathless theatrical excitement to the recording. The good date/bad date songs “Me, Too” and “One-Woman Man” are comic highlights, thanks to the performances ofJennifer Simard and Daniel Reichard, who function as an all-purpose ensemble. There are also some introspective songs: “Take Me Into You,” “The Greatest Friend,” and “The Better Man Won.” The opening and closing numbers, with clever orchestrations by Bruce Coughlin, are good examples of the score’s unique musical language. Hocking gets the best song of all, “Because.” — Matthew Murray