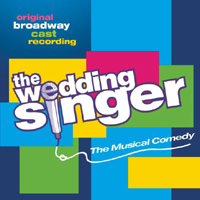 (4 / 5) Antipathy towards screen-to-stage adaptations influenced a great many reactions to this tuner that musicalized the 1998 Adam Sandler movie for Broadway. It’s a pity, really, because the score by Matthew Sklar (music) and Chad Beguelin (lyrics) is one of the most charming and tuneful of the past 15 years or so. It helps that the songs are delivered by such theater vets as Laura Benanti, Amy Spanger, Rita Gardner, and Felicia Finley — along with comedian Stephen Lynch, who, in his Broadway debut, thoroughly charmed as the title character, a guy who’s dumped by his girlfriend on the eve of their own nuptials. Naturally, he loses his taste for performing at other people’s wedding receptions, and it’s only with the help of a good friend (Benanti) that he gets back on his feet and discovers genuine romance — wth her of course. Because the show is set in the mid-1980s, composer Sklar pays homage to the pop icons of the day in his melodies, and his work, combined with the inventive and sometimes ingenious orchestrations of Irwin Fisch, calls to mind tunes by the likes of Madonna, Billy Joel, the Go-Gos, Stevie Nicks, and Michael Jackson. Beguelin’s lyrics match the styles of songs from the era, and they also brim with a kind of colloquial wit. Not everything in The Wedding Singer is great; the biggest stumble is “Move That Thang,” a rap number for Gardner, The Fantasticks’ original Luisa. But much of the score is golden. — Andy Propst