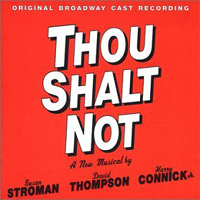 (1 / 5) In theory, it was an inspired idea to have Harry Connick, Jr. write the score for this Susan Stroman-David Thompson adaptation of Thérèse Raquin, Émile Zola’s tale of love, crime, and guilt. Since the steamy French narrative was to be transplanted to New Orleans, Connick, who was born and raised there and has a command of the city’s indigenous musical idioms, seemed the ideal choice for the project. In practice, however, that choice proved less than ideal. Almost none of the music heard on this hour-plus recording is spicy; most of it is pallid. But the blame for this shouldn’t be pasted on Connick exclusively, as he had Thompson’s inept libretto to work with, and he also had to suffer two miscast leading players interpreting his work. As Therese and her illicit lover, Laurent, Kate Levering and Craig Bierko are as passionate as two glasses of tepid tap water. Norbert Leo Butz, as Therese’s doomed hubby, Camille, delivers two songs that do have a little something extra: the reprise of “It’s Good to Be Home” and “Tug Boat” (Levering duets on the latter). Debra Monk, as Camille’s mother, gets to warble a couple of forgettable Connick tunes. No one who listens to Thou Shalt Not once will want to listen twice. — David Finkle