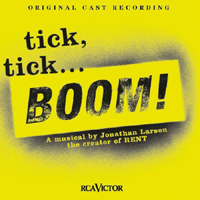 (3 / 5) This minor but appealing Off-Broadway effort was adapted by playwright David Auburn from a semi-autobiographical, one-person show that had been written and performed by songwriter Jonathan Larson. It also incorporates material from an unproduced Larson project titled Superbia. The show’s main weakness is obvious: It’s a little hard to care very deeply about the angst suffered by an unsuccessful musical theater songwriter as he approaches age 30. But there are many mitigating factors, not the least of which is one’s knowledge that Larson would die unexpectedly a few years later. The show and the cast album also provided an early showcase for the brilliant singing actor Raúl Esparza. Equally effective are Amy Spanger as Jon’s increasingly fed-up lover and Jerry Dixon as his best friend, who has given up bohemia for business and who harbors a heartbreaking secret. And then there are the songs, which confirm Larson’s thrilling talent. They include the touching trio “Johnny Can’t Decide”; the witty “Sunday,” a number about working in a diner that’s also a parody of a certain Stephen Sondheim ballad; and the fervent “Come to Your Senses.” The impassioned finale “Louder Than Words,” with its wounded idealism, is excellent. A moving bonus track features Larson himself singing a cut number, “Boho Days.” — David Barbour