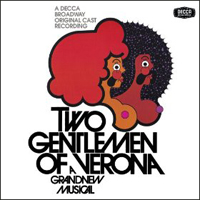 (3 / 5) When you listen to the original cast recording of Two Gentlemen of Verona, you’ll know why this show won the 1972 Tony Award for Best Musical but not for Best Score. Even though the score, by composer Galt MacDermot and lyricist John Guare, is hopelessly locked into the 1970s, the album is an enjoyable listen; it captures a show of tremendous youth, vivacity, and edge, a unique mixture of Shakespeare and rock. The result is a century-spanning musical party. Sure, there are some duds, such as “Thurio’s Samba,” in which swear words and vulgarities are rhymed with nonsense syllables. But the standouts — “Summer, Summer,” “I Love My Father,” “Night Letter,” “Hot Lover,” and the finale — are quite a bit of fun. A fine cast helps: the one-and-only Raul Julia, Clifton Davis, Diana Davila, and Jonelle Allen, all of whom sound as if they’ve having the time of their lives. — Matthew Murray