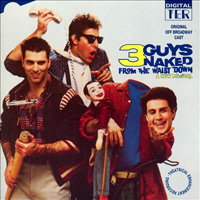 (2 / 5) This three-character musical about the rise and ultimate dissolution of a gifted trio of young comedians has one big problem in that it’s never funny enough. Still, the story holds, supported by a peculiar and distinctive set of songs written in a jazz-rock fusion idiom. The music, by Michael Rupert, is always arresting if not terribly melodic, and it’s bolstered considerably by Michael Starobin’s orchestrations. The characters’ introductory songs are the most satisfactory: “Promise of Greatness” (sung by Scott Bakula) and “Angry Guy” (sung by Jerry Colker). “Operator” sets up the third comic (played by John Kassir), who is the real genius of the group; he becomes more unbalanced as the show unfolds, and he ultimately commits suicide. You may have trouble comprehending some of the lyrics, which often sound more like they were crafted for rock songs rather than theater songs. — David Wolf