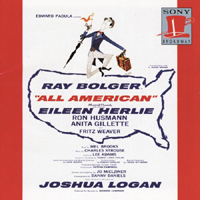 (3 / 5) How many Joshua Logan flops can a person do in one year? Anita Gillette managed two in 1962, soubretting through Mr. President and this provincial-college satire-with a book by Mel Brooks, no less. (That sure sounds like Brooks in the opening number as recorded for this cast album, exclaiming “Look at him, the Lone Ranger!”) Columbia gave both shows the deluxe treatment, but this score, by Charles Strouse and Lee Adams, is by far the more felicitous. Robert Ginzler’s orchestrations are among the best Broadway has ever heard; listen to the brass well up halfway through “If I Were You,” and try not to smile. Star Ray Bolger is a little short on vocal equipment — and, more surprisingly, on star quality. But his vis-a-vis, Eileen Herlie, is wonderful, particularly when helping Bolger introduce “Once Upon a Time.” Sturdy-voiced juvenile Ron Husmann gets an even better ballad, “I’ve Just Seen Her,” and Gillette smolders through “Night Life.” A few of the other songs are by the numbers — the patriotic salute, the football rally fight song — but some quirkiness seeps through. Fritz Weaver, as a Madison Avenue sharpie, even gets a merciless send-up of “Climb Ev’ry Mountain.” Pretty gutsy in 1962.  — Marc Miller