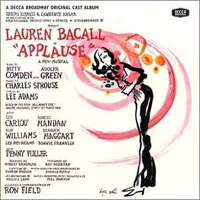 (3 / 5) When librettists, composers, and lyricists take on a masterpiece, they rarely improve it. Such is the case with this musical version of the classic film All About Eve. Though Applause was a hit, it has dimmed in the public’s consciousness, and the Charles Strouse-Lee Adams score can best be described as one that has its moments. Lauren Bacall is Margo Channing in the disco era, and though her opening song, “But Alive,” could be better, “Who’s That Girl?” — in which Margo sees herself on TV in a movie she made many moons ago, and comments — comes across as extra-special material. The title song is sometimes known as The Actor’s Anthem, although many performers may relate more readily to the acerbic “Welcome to the Theater.” There are laid-back charms in “Good Friends” and “One of a Kind,” the latter a pleasant, jazz waltz duet sung by Bacall with Len Cariou (heard here before A Little Night Music and Sweeney Todd) as Bill Sampson, but the rest of the score seems little more than filler. The CD offers four fascinating bonus tracks taken from demos that Strouse played and sang during the show’s creation. One is the title song, but the other three numbers were dropped. They indicate that the show was more ambitious in the planning stages;  ”’Smashing!’-New York Times” is a smart idea set to a haunting tune. — Peter Filichia