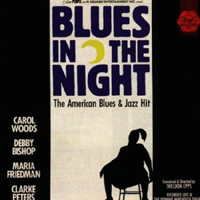 (4 / 5) This live recording of the revue Blues in  the Night is a real gem. Arrangements that split the difference between jazz and theater combine with fetching performances of familiar and less well-known material by a variety of composers and lyricists to tell the story of three women (played by Carol Woods, Maria Friedman, and Debbie Bishop) who are in love with the same rotten guy (Clarke Peters). A rowdy, appreciative audience adds to the atmosphere and fun. Each of these gifted ladies gets a shining personality number: Woods does “Take Me for a Buggy Ride,” Friedman nails “Taking a Chance on Love,” and Bishop describes her “Rough and Ready Man.” Peters is most enjoyable in “Baby Doll.” The women make a sassy trio in “Take It Right Back,” and the ballads are also done full justice: Woods’ well-acted “Lover Man,” Friedman’s thoughtful “Willow Weep for Me,” and the group’s sweet rendition of “It Makes My Love Come Down.” In fact, several of the group numbers are home runs, among them haunting performances of “Blues in the Night” and “Nobody Knows You When You’re Down and Out.” Within the theatrical sub-genre of 1980s and 1990s revues crafted along similar lines (Sophisticated Ladies, Five Guys Named Moe, Black and Blue) this one is a personal favorite. [Note: A previous version of the show played briefly in New York in 1982 with Jean Du Shon, Debbie Shapiro (Gravitte), Leslie Uggams, and Charles Coleman in the cast, but that production yielded no cast album.]  — Morgan Sills