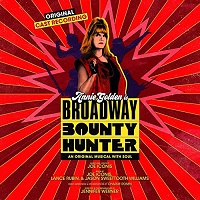 (4 / 5) Here’s a highly enjoyable cast album of a fun show with a fanciful, meta-theatrical concept, built around the dynamic stage and film singer-actress Annie Golden, who started out as the leader of the punk band The Shirts before going on to play Jeannie in the film version of Hair, then to numerous other film, TV, and stage roles (Desperately Seeking Susan, Longtime Companion, Prelude to a Kiss, 12 Monkeys, Orange is the New Black) as well as some fine work on Broadway (most notably in The Full Monty). In Broadway Bounty Hunter, Golden played a highly fictionalized version of herself caught up in a crazy plot involving — well, bounty hunting.  The show was (obviously) crafted specifically for her by the super-talented composer-lyricist Joe Iconis, working in collaboration with co-book writers Lance Rubin and Jason Sweettooth Williams. It would have been interesting to see if Broadway Bounty Hunter would have worked with someone else in the title role in subsequent productions, but it was not a box-office success in its limited Off-Broadway run, and there was no transfer to an open-ended engagement on Broadway or anywhere else. So it’s nice to have Iconis’s well-crafted, clever, tuneful, post-modern theatrical rock and pop songs preserved on this well produced cast album. Golden’s strong, exciting, wide-ranging voice and her abundance of charisma come through big-time in a clutch of songs, from the roof-raising “Woman of a Certain Age” (wisely used as both the show’s opener and closer) to the soulful “Spin Those Records” and the intense, hard-rocking 11 o’clock number “Veins.” Other major voices and personalities heard on the album include Badia Farha, Alan H. Green, Christina Sajous, Emily Borromeo, and the always welcome Brad Oscar. A kick-ass band is led by conductor/musical director Geoffrey Ko, and Joel Waggoner’s vocal arrangements are excellent. Given the lack of commercial success of both Broadway Bounty Hunter and Iconis’s Be More Chill, at least in their NYC runs, it’s devoutly to be wished that he’ll soon have the major hit he so well deserves.  — Michael Portantiere