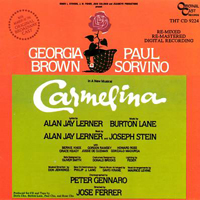 (3 / 5) Picture Mamma Mia! leavened with wit, charm, and soaring melody, and you’ll have some notion of this two-week 1979 flop. Both are based on the same source material, the 1968 film Buona Sera, Mrs. Campbell — although the creators of both shows denied any connection to it. With music by Burton Lane, lyrics by Alan Jay Lerner, and a book by Lerner and Joseph Stein, Carmelina was critically excoriated as “old-fashioned,” which is sort of like complaining that snowfalls and Courvoisier are old-fashioned. There’s plenty wrong with this not-quite-cast album, assembled well after the show’s closing: Leading man Paul Sorvino, filling in for Broadway lead Cesare Siepi, is vocally and temperamentally miscast; Hershy Kay’s original orchestrations have been replaced with thin, new charts by Philip J. Lang; and Virginia Martin is missing, as is her amusing reprise of “The Image of Me.” Even the vocal balances in the showstopping male trio “One More Walk Around the Garden” are off, robbing the listener of full enjoyment of one of Lane’s most gorgeous melodies. But this remains a rich, romantic score in the classic tradition, with a wonderful title-role turn by Georgia Brown. Convincingly Italian and Anna Magnani-earthy, Brown brilliantly navigates the plot exposition and character-conniving of “Someone in April,” commits wholeheartedly to “Why Him?” and “Love Before Breakfast,” and growls entertainingly through “I’m a Woman.” Note how ingeniously the score tells this offbeat story and compare it with the enormously successful but brainless ABBA-thon that is Mamma Mia! There is no justice.  — Marc Miller