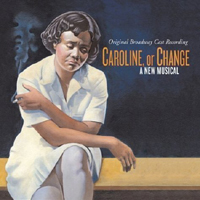 (3 / 5) Tony Kushner writing the book and lyrics for a musical full of inanimate objects? If you did not see Caroline, or Change onstage, you may have difficulty getting past the novelty of a singing washing machine, dryer, radio, bus, and moon — but once you do, this show is revealed to be an attractive and often emotionally explosive folk opera. Jeanine Tesori supplies intriguing and highly listenable music, heavily steeped in the styles of the show’s 1963 setting, for this tale about the relationship between a black woman named Caroline Thibodeaux and the southern Jewish family that employs her as a maid. Tonya Pinkins gives an earth-shaking, all-encompassing performance as Caroline, making the emotionally and musically difficult score sound easy, reaching stratospheric heights in her monumental, five-minute-long, 11-o’clock number “Lot’s Wife.” She receives solid support from such Broadway notables as Veanne Cox, Chuck Cooper, and Alice Playten, while Tony Award-winner Anika Noni Rose is impressive as Caroline’s daughter. Although many of the individual songs are striking in their own right — including the youthfully catchy first-act finale “Roosevelt Petrucius Coleslaw” and “The Chanukah Party,” with its already immortal lyric “Chanukah, oh Chanukah / Oh Dreydl and Menorah! / We celebrate it even though / It isn’t in the Torah!” — this recording is best experienced straight through from beginning to end. — Matthew Murray