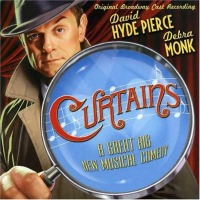 (2 / 5) Part backstage satire and part whodunit, Curtains was a long-gestating property. At the time of its opening, the show was touted as having the last original score by the legendary team of lyricist Fred Ebb, who died in 2004, and composer John Kander. (Whatever the order of composition, it turned out that the team’s adventurously rewarding The Scottsboro Boys and The Visit both premiered in later years.) Peter Stone, who died in 2003, is credited with the original book and concept of Curtains; Rupert Holmes, who already had “whodunit” experience with Drood, came in to help restructure the book and to work with Kander on writing  some additional lyrics. The result is a modestly entertaining piece, but it doesn’t have quite enough bite to succeed as satire or enough intrigue to succeed as a murder mystery. Centered on a Broadway-bound musical that’s experiencing out-of-town woes, Curtains opens with the mysterious murder of the show’s lame leading lady (a hilarious Patty Goble). The cast and production team are up in arms trying to figure out who the culprit is while simultaneously attempting to improve their show so it won’t meet the same deadly fate at the hands of the New York critics. At the center of it all is theater-crazed detective Lieutenant Frank Cioffi, played with boyish charm by David Hyde Pierce. The star is supported by a strong cast including Debra Monk as the show-within-the-show’s gruff producer; Edward Hibbert as the catty director; and Karen Ziemba and Jason Danieley as the songwriting team, once married but now divorced. The cast works their magic — especially entertaining is Monk’s delivery of her character’s hard-as-nails mantra, “It’s a Business” — but the material is rarely up to the intelligence or melodic zeal of previous Kander and Ebb scores. The always reliable William David Brohn provides orchestrations that practically come with their own pair of jazz hands, but they aren’t able to elevate Kander’s music beyond the level of stylishly presentable. Although Curtains is a pleasant diversion from the darker K&E works, it will not likely stay with you for long. — Matt Koplik