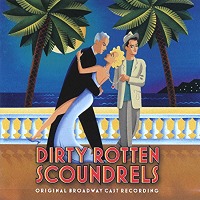 (4 / 5) David Yazbek’s Broadway scores are just plain fun, whether it’s the frenetic farce of Women On the Verge of a Nervous Breakdown or the blue-collar humor of The Full Monty. For Dirty Rotten Scoundrels (book by Jeffrey Lane, based on the 1988 film), Yazbek wrote a genuine, old-fashioned musical comedy in which  the various songs put on as many guises as the con-men characters. There are pop pastiches, a scatological list song presented with Cowardesque elegance, a rueful ballad, a samba, and the most vulgar “I want” song in musical history, along with several numbers that require the performers to use accents outrageous enough to start another Franco-Prussian war. For all these varied styles, the score is well-tailored to the characters, and the excellent cast delivers. The scoundrels are the suave Lawrence Jameson (John Lithgow) and the crass Freddy Benson, the latter a small-time grifter eager for bigger scams. Klutzy heiress Christine Colgate (Sheri Rene Scott) is their mark, with Joanna Gleason and Gregory Jbara as the obligatory comic secondary couple. (I told you it’s a traditional musical comedy.) The versatile Lithgow assumes personae ranging from a dignified pseudo-prince to a sadistic Austrian shrink, yet still achieves a believable wistfulness in “Love Sneaks In.” Tony-winner Butz salivates over the “Great Big Stuff” he craves (“I wanna be like Trump!”), shrieks as mad Prince Ruprecht, and, with Scott, croons an anatomy lesson in “Love Is My Legs.” Scott pairs well with both tricksters and soars in the zippy “Here I Am.” (Yazbek is a fan of Ira Gershwin and Cole Porter’s skill with internal rhymes; they’d approve his work here.) Gleason and Jbara make the most of their numbers, especially the absurd yet sexy “Like Zis/Like Zat.” Harold Wheeler’s orchestrations have the right comic-caper tone for the proceedings, and the vocal arrangements by Yazbek and Ted Sperling let the ensemble punctuate the score with jazzy exclamation points. The recording includes two demos by Yazbek, plus Scott in a lovely version of “Nothing Is Too Wonderful To Be True” — a surprisingly pretty song with Butz’s comic verses removed. There’s also a bit of dialogue from Lithgow, warning listeners just before the tracks that reveal the final twists — the likes of which we haven’t encountered since The Mystery of Edwin Drood. The title of the show’s opening number is “Give Them What They Want.” I want more David Yazbek musicals. — Laura Frankos