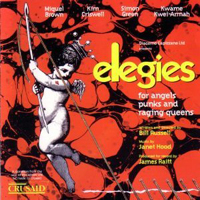 (5 / 5) An alternately moving, exciting, and hilarious program of songs and monologues about AIDS victims and their loved ones, this show premiered Off-Broadway in 1987, but no cast album of that production was released. Inspired by the enormous Names Project quilt that memorializes those lost to AIDS, and also by Edgar Lee Masters’ Spoon River Anthology, the piece is a brilliant collaboration between Bill Russell (book and lyrics) and Janet Hood (music). The London cast recording includes none of the show’s monologues but all of its songs — and what songs they are. In an uncommonly strong score, a highlight is “And the Rain Keeps Falling Down,” the lament of a man who can’t let himself cry over a friend’s illness. Mindful of the fact that an evening made up entirely of sad songs would be unbearable, Russell and Hood came up with some numbers that are humorous (“I Don’t Do That Anymore,” “Spend It While You Can”), rousing (“Celebrate”), and/or inspirational (“Learning to Let Go”). This recording begins with the almost-title song “Angels, Punks and Raging Queens” in a touching rendition by Kim Criswell, who also excels in the score’s best known number, the heartbreaking “My Brother Lived in San Francisco.” The other three singers — Miguel Brown, Simon Green, and Kwame Kwei-Armah — are equally fine. — Michael Portantiere 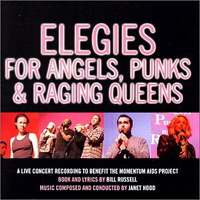 (5 / 5) This is a live recording of a concert version of Elegies…. that was performed as an AIDS benefit. Featuring a cast of 52, the concert was conducted by Janet Hood and directed by Bill Russell. The recording begins disappointingly with Alice Ripley’s forced rendition of “Angels, Punks and Raging Queens,” a song that wants a much more simple, less showy performance, but the rest of the singers are wonderfully well matched to the material. Brian d’Arcy James lends his gorgeous voice to “And the Rain Keeps Falling Down,” Clent Bowers and Doug Eskew offer blessed comic relief in “I Don’t Do That Anymore,” and Emily Skinner’s singing of “My Brother Lived in San Francisco” is very special. (Skinner also duets with Ripley, her erstwhile Side Show twin, in “Celebrate.”) On hand as well are such talents as Alton Fitzgerald White, Orfeh, Amy Spanger, Stephanie Pope, Kane Alexander, Kathy Brier, Sharon Wilkins, and Kelli Rabke. The album ends grandly with Norm Lewis soaring through “Learning to Let Go” as the entire company sings backup and the audience claps along. Given that this is a live recording with no touch-ups, some of the performance sounds a bit raw, but that’s entirely appropriate to the subject matter. A major selling point of the disc is that it includes six of the show’s monologues, delivered to full effect by Steve Burns, Erin Torpey, Veanne Cox, Bryan Batt, Christopher Durang, and Mario Cantone.  — M.P.