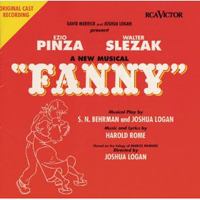 (4 / 5) Based on Marcel Pagnol’s Marseilles trilogy about love and abandonment on the French Riviera, this nearly forgotten show has a beautiful score by Harold Rome that’s representative of the golden era of Broadway from which it comes, full of gorgeous tunes and excellently crafted, character-specific lyrics. The performances by the great opera singer Ezio Pinza and the young Florence Henderson as Cesar and Fanny are also tops. Fanny was the first Broadway venture of theater impresario David Merrick, and the cast album suggests how impeccably well produced it was. Joshua Logan directed, and the show was a solid success. On the recording, Pinza’s lush, large voice is thrilling. Henderson, long before her TV stint on The Brady Bunch, displays a compelling soprano, while the Hollywood character actor Walter Slezak portrays Panisse with charm and joie de vivre. William Tabbert’s legit tenor sounds beautiful in the songs of Marius, Fanny’s young lover. Highlights of the score include “Restless Heart,” “Why Be Afraid to Dance?” and one of the most touching ballads ever written for a musical: “Welcome Home.” Some of the atmospheric numbers, such as “Shika, Shika” and “Octopus Song,” are less pleasing; also unfortunate is the flat, fuzzy mono sound that underlines the antique nature of the album. Still, there is much to enjoy here.  — Gerard Alessandrini