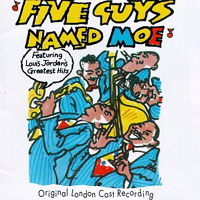 (3 / 5) Super-producer Cameron Mackintosh found this little revue of Louis Jordan songs at the Theatre Royal Stratford in London’s East End and liked it so much that he revamped the physical production, kept the cast intact, and transferred Five Guys Named Moe to the West End, where it ran for more than four years. This live recording of the London production is a festive disc and much preferable to its Broadway counterpart (see below), although it has slightly less content and chatter. Dig Wayne is Nomax, and the Five Moes who come to help him are Big Moe (Kenny Andrews), Four Eyed Moe (Clarke Peters), Little Moe (Paul J. Medford), No Moe (Peter Alex Newton), and Eat Moe (Omar Okai). They’re a dynamic group of performers. In the theater, audience participation was practically mandated; at home, you can clap and sing along, or let the audience heard on the disc do it for you. Highlights are the title song, “I Like ‘Em Fat Like That,” “What’s the Use of Gettin Sober,” and “Reet Petite and Gone.” An augmented band — nine additional musicians were engaged for the recording — contributes significantly by adding new instrumental colors, giving each song a more distinctive, swingier groove and a lighter touch than is heard on the Broadway cast album. The vocal sound is also smoother and better blended  (listen to “Saturday Night Fish Fry” and the title song), yet the voices are easy to tell apart, so you don’t have to keep consulting the booklet to figure out who’s singing. — Morgan Sills 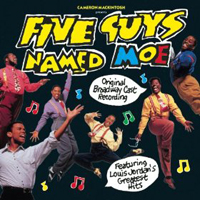 (2 / 5) It must have seemed that Five Guys Named Moe had “Broadway cash cow” written all over it: a transfer of a small-cast West End hit in an era when the most popular shows on the Great White Way were British imports. But this celebration of a distinctly American musical legend, Louis Jordan, ran little more than a year in New York. Comparing the Broadway cast album with the London recording, it’s apparent that something hard to define has been lost. The reduced instrumentation (only six onstage musicians) gives this performance more of a jazz-combo feel. Broadway professionalism is everywhere in evidence, but true spontaneity and joy are in shorter supply; the licks sound rehearsed, the group singing is muddy, the tempi are slower in places. Even the audience, faded in and out by the engineer, is less noisy. On the credit side, the Broadway CD booklet offers lyrics and more photos than the London insert, plus essays by David Hinckley, title-song author Larry Wynn, and Cameron Mackintosh himself.  — M.S.