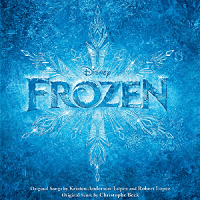 (4 / 5) Arguably the most popular of Disney’s recent titles, Frozen revolves around two royal sisters: Elsa, who has the power to conjure snow and ice but is unable to control it, and Anna, who possesses no magical powers but is adventurous and desirous to be in love. By the end, they realize that the love they have for each other is strong enough to help Elsa control her powers, and is just as meaningful as any romantic relationship. A massive and enduring success, Frozen has received constant exposure in pop culture and media, leading many to become exhausted by the film, but first time listeners to this soundtrack will likely understand why it has continued to capture audiences. The songs, written by the married team of Kristin Anderson-Lopez and Robert Lopez (with incidental and choral scoring by Christophe Beck), are an intelligent blend of traditional musical theater and modern day pop, making the score feel both classic and current. (Doug Besterman once again provides lush and creative orchestrations.) The lyrics are often playful and cute while still offering strong character insight. “In Summer,” in particular, has a wittily morbid edge to it as sung by Olaf, a clueless snowman (Josh Gad) who wants nothing more than to experience warm weather, not realizing how it will effect his snow-based body. Frozen also benefits from having the strongest vocal cast for a Disney film since Beauty and the Beast, employing almost exclusively Broadway talent. In addition to Gad, we have Santino Fontana bringing credible Prince-ly charm to Hans,  Kristen Bell as Anna, and Idina Menzel as Elsa. Bell gets quite a few songs to showcase her pure, classic-Disney-Princess soprano (she and Fontana work particularly well together on “Love is an Open Door”), but it’s Menzel who does the vocal heavy lifting, as in the soundtrack’s phenomenal breakout hit, “Let It Go.” Though it has been overplayed to the point of its becoming a pop culture punchline, at its core the song is well-structured and catchy, belted out by Menzel with great relish. In the movie and on this soundtrack album, only Jonathan Groff is musically  wasted as Kristoff, a romantic foil for Anna, his singing limited to the thankfully short “Reindeers are Better Than People.” Otherwise, Frozen is a delight. — Matt Koplik 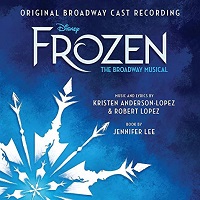 (3 / 5) In the continuing line of movies translated to the stage, Disney has had an erratic track record, ranging from great success (The Lion King) to major disappointments (The Little Mermaid, Tarzan). The Broadway adaptation of Frozen, which this recording represents, lies somewhere in the middle. On the plus side, the show tries to dig deeper into its source material than most other Disney stage musicals, but the results are often middling. Kristin Anderson-Lopez and Robert Lopez have been brought back to expand their score from the film, and Dave Metzger’s orchestrations pretty much follow Doug Besterman’s blueprints. But while new songs like “Dangerous to Dream,” “Hans of the Southern Isles,” and “True Love” are commendable in their intentions to give the characters complexity, they really can’t be described as anything more than serviceably listenable. Of all the additions, the song that comes closest to standing out is “Monster,” a second-act number for Elsa — but, musically, even that feels more like a lesser “Let it Go” than a fully developed new piece. While the principal players may not be able to separate themselves completely from the original movie cast, they are all strong singers and inject plenty of personality into their performances. As the two sisters, Caissie Levy (Elsa) and Patti Murin (Anna) work particularly hard not to present cartoonish interpretations while skillfully navigating the demands of the score. The recording is also well worth a listen for Stephen Oremus’s stunning vocal arrangements, which give the pre-existing songs from the film a shot of Broadway adrenaline and provide the show’s ensemble with rich choral material (“Vuelie” and “Queen Anointed” are particularly haunting). If this recording isn’t good enough to replace Frozen’s original soundtrack, it’s worthy to stand alongside it — or a few steps behind, at least. — M.K.