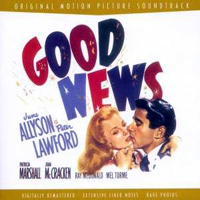 (2 / 5) The first movie written by Betty Comden and Adolph Green for MGM, Good News has a smart and funny script. Only six songs were retained from the original 1927 hit stage musical by Ray Henderson, Lew Brown, and B. G. DeSylva. Three of them — the title song, “The Varsity Drag,” and “He’s a Ladies’ Man” (here changed to “Be a Ladies’ Man”) — were extensively reworked by vocal arranger Kay Thompson and co-producer Roger Edens. In addition, Edens wrote two new songs with Comden and Green: “The French Lesson,” a real highlight, and “An Easier Way,” which didn’t make it to the final cut of the film. Also interpolated was the Edens-Hugh Martin-Ralph Blane number “Pass That Peace Pipe.” Leads Peter Lawford and June Allyson sing passably well. The third major player, Broadway dancer and comedienne Joan McCracken, was more comfortable dancing than singing and is perhaps more effective in the film than on this recording. Though the show and the movie take place in the 1920s, no attempt was made to capture the feel of that era in the musical arrangements, which sound like ’40s pop. The Rhino CD marked the first complete release of the soundtrack; it includes Mel Torme’s outtake reprise of “Lucky in Love” and the deleted “An Easier Way,” an interesting piece that contrasts the characters played by Allyson and Patricia Marshall. The CD also has a dopey interview with Allyson and two cuts,  “The Varsity Drag” and the title song, from the apparently lost 1930 film version of the stage musical. — David Wolf 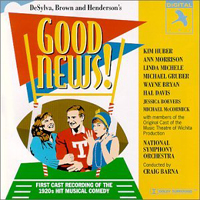 Studio Recording With Cast Members of the Music Theatre of Wichita Production, 1996 (JAY)

(2 / 5) Some months after the closing of an unsuccessful 1975 Broadway revival of Good News, cast member Wayne Bryan produced a privately issued album of that production from a tape of a live performance, plus a second LP containing items that had been cut during the show’s tryout. In an ideal world, this is the recording that would be widely available, but it is not. Bryan never lost his fondness for this material, and years later, as producing director for the Music Theatre of Wichita, he and writer-director Mark Madama got permission to write a new version of the show. That successful 1993 production was the basis for the album at hand. Though it presents the basic, original stage score plus seven more Henderson-Brown-DeSylva songs, including “Button Up Your Overcoat,” “You’re the Cream in My Coffee,””Life Is Just a Bowl of Cherries,”and”Keep Your Sunny Side Up,” the recording is a little pale. Craig Barna’s orchestrations are thin, and his musical direction doesn’t have much spirit. The performers — Ann Morrison, Michael Gruber, Kim Huber, Linda Michele, and Jessica Boevers — are fairly colorless. They’re joined by Wayne Bryan himself, who was probably too old by then to play an undergraduate but who still sounds terrific, especially in “Never Swat a Fly.” With its irresistible score and archetypal plot about a football player who must pass his astronomy final if he wants to play in the Big Game, Good News is good fun, and while this disc isn’t bad by any means, the material deserves to be performed with a little more sass.  — D.W.